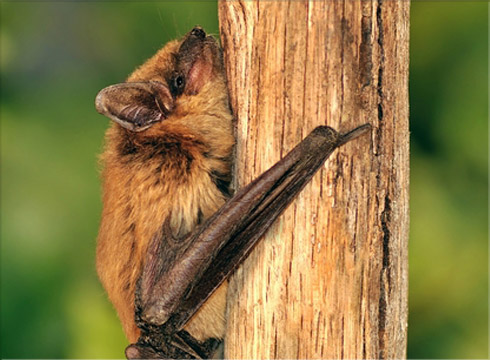 Insect-eating bats contribute heavily to a healthy environment and big brown bats are no exception. They help keep populations down among numerous insect pests. Studies have shown that big brow bats consume numerous beetles, stink bugs and night-flying insects, including mosquitoes. Females will consume their body weight in insects every night. Now more than ever, bats are being driven out of their natural forest habitats due to increasing human populations and logging. As a result, bats, including the big brown species are now frequently found roosting in commercial and residential structures, including garages, attics, and barns. In their natural setting, big brown bats will form maternity colonies underneath tree bark and in small cavities of the trees trunk. Big brown bats can live up to 20 years, but on average that number is considerably less. Mating takes place throughout fall and winter; females don’t become pregnant until the following spring after emerging from hibernation. Baby bats, commonly referred to as pups, are born through May and June. Pups live off their mother’s milk for about 4 to 5 weeks and will typically start learning to fly between 3 and 5 weeks. Maternity colonies can have as little as 20 bats, or as many as 300 bats; these colonies consist of pregnant females, nursing females, as well as females with older, well-developed young.

Peak activity for bats takes place during late May through early October. Young bats tend to be a nuisance in July and August when they make noise flying around attic spaces.