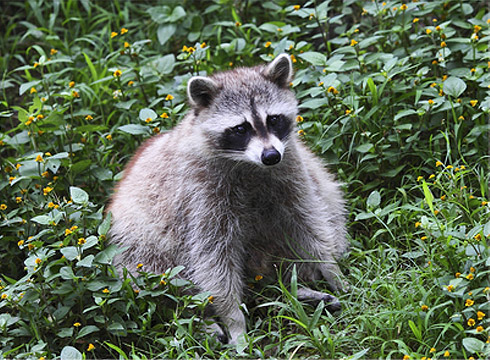 Because raccoons hind legs are longer than their front ones, raccoons carry themselves with a hunched appearance when they move. The front feet have five toes that allow raccoons to hold and manipulate their food. Naturally, they prefer wooded, forest environments near small water sources. However, as forests become more urbanized, raccoons have adapted to various environments here in New England. In more urban areas, populations get overrun due to increased safety from predators and often, readily available sources of human food. Raccoons have a diversified pallet but prefer water creatures such as crayfish, frogs, fish, and snails. Insects, small mammal eggs, garden fruits and vegetable, and findings from homeowners’ garbage cans are also perfectly acceptable forms of food. The mating season for raccoons can happen as early as January to as late as June. Prior to mating season, raccoons will create dens out of piles of rocks, hollow stumps, and empty tree trunk cavities to provide shelter for raising their kits (babies). Often, dens end up in homeowners’ attics, crawl spaces and chimney.

Raccoons tend to be highly active around homes and in chimneys during their birthing season, which is the middle of April through May. They are active again in October and November as they seek shelter for the winter.