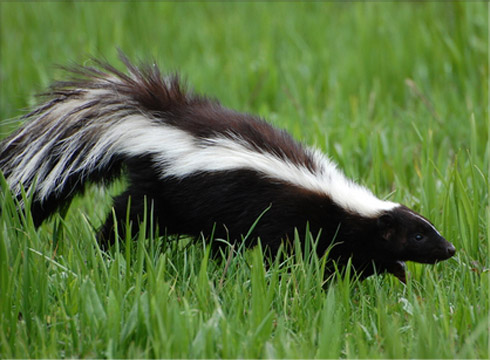 Skunks spend the majority of their life alone and only engage with each other to breed, but in New England, they are known to burrow together during the winter to stay warm. Skunks are polygynous, which mean a male skunk will often have multiple mates. For the most part, skunks stay in their burrows during the daytime and come out to search for food during the evening. Their diets consist of insects, small birds and mammals, grass, berries, and fungi. Their mating season begins in very early spring (usually around February). A females litter size on average is between six or seven kits (babies). Baby skunks are blind and toothless when born, but their infamous spraying defense mechanism develops prior to their eyes even opening when they are only a few weeks old. These glands produce a mixture of chemicals containing sulfur which are responsible for the potent odor. The odor is such an effective defense that it can deter predators as large as bears. Their accuracy and distance are impressive as well, with the ability to reach up to 10 ft.

Skunks peak in the middle of February as they are leaving their dens for the beginning of their mating season. Young skunks will leave these dens around June and July. The young skunks tend to be out during daylight hours, so people will have an idea if their is a skunk den on their property. Skunks peak again in late October and early November. when they search for winter den sites.