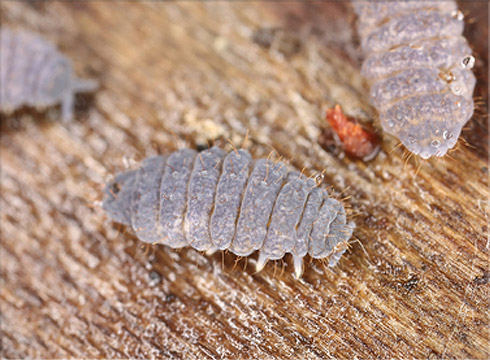 Certain species of springtails are commonly referred to as “snow fleas” when people find them in the snow mimicking the jumping behavior of a flea, however, springtails are not in any way related to fleas. Springtails are found year-round – they are able to survive during frigid winter temperatures because of a special protein that acts like anti-freeze. Springtails don’t have wings, instead they get around by jumping, using a unique catapult system. Their jumping is especially noticeable during the winter when they are contrasted against white snow. They are common in summer around pools with nearby vegetation, around air conditioning condensate drain lines and other moist areas. In late winter, snow fleas emerge on sunny days and gather in large numbers around bases of trees where snow has melted. Because of their small size, they look like flecks of pepper or ashes on the surface of the snow. They typically feed on decaying plant matter.

Springtails are active throughout the entire year.