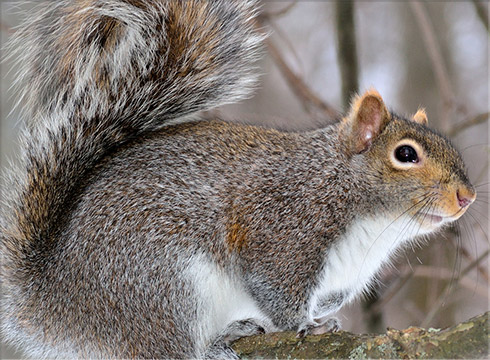 Eastern Gray Squirrels are the most commonly seen variety here in New England. They belong to the Rodent family and spend the majority of their lives high up in trees. Gray squirrels prefer to live in wooded areas but commonly are found in or near urban areas such as yards, gardens, and city parks (any areas having a decent amount of deciduous trees). Eastern Gray Squirrels tend to prefer living in White Oak, American Beech, American Elm, and Red Maple trees. Their breeding season can be twice per year, younger females sometimes will only have a single litter during the spring. Older females will breed for a second time during the summer if food is readily available. The lifespan of a typical Gray Squirrel is usually around five years. One of their greatest assets of the gray squirrel is their tail; they use it for balance, swimming, and protection from the elements. They are more active during early to mid-mornings and then again in the early evening. Their primary food sources are various nuts, tree bark, and insects but often they score easier meals from birdfeeders, and homeowners gardens - flower bulbs and vegetables are a favorite.

Eastern Gray Squirrels begin breeding in January and February, and are highly active in March as they seek out shelter in chimneys and vents for raising their young. They are also active in October when they have second litters and seek out shelter for the winter.