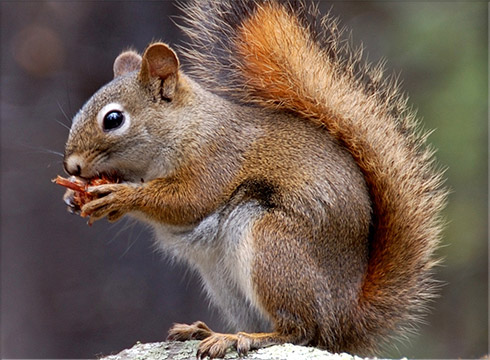 Red Squirrels create round shaped nests called dreys, constructed from twigs, leaves and moss. In their natural environment, red squirrels will usually nest inside of tree trunks or set against the branches. They do not hibernate, but they do become much less active during our cold New England winters. Their peak activity is typically during warm summer days, often around dusk.  During the winter months, red squirrels are known to be most active during the middle of the day when they leave their nest in search of stored food. Females can have up to two litters per year, consisting of around four offsprings, usually between March and July. Under average to normal conditions, a red squirrel can live up to six years. They are active primarily during the daytime which is mostly occupied by foraging for food.