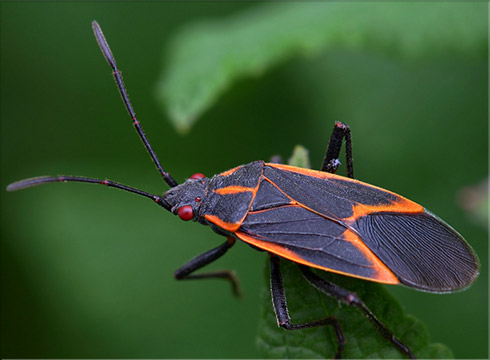 Boxelder bugs are named after the tree they feed on – often found on and around boxelder trees. This species is one of our fall invaders and comes inside structures to wait out the winter with us. In autumn, boxelder bugs aggregate on the south side of rocks, trees and buildings where the sun hits. After large masses gather, they migrate to nearby buildings or homes to overwinter. These pests tend to hide in small cracks and crevices in walls to insulate themselves from the cold winter temperatures, but do not eat anything during this time. In late March to early April, adults leave their overwintering sites to return to their host trees. Boxelder bugs are not known to bite, but their piercing-sucking mouthparts can occasionally puncture skin, causing a slight irritation and producing a red spot similar to a mosquito bite. When crushed or handled roughly, boxelder bugs may leave a reddish orange stain from their fecal material that can result in discoloration of curtains, drapes, clothing, etc. and may produce a disagreeable odor (especially when crushed).

The Boxelder Bug is primarily active in the fall, especially during October and November.

Get Rid of Elder Bugs Today