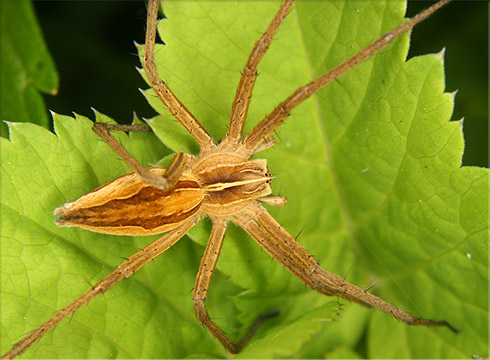 The nursery web spider greatly resembles the wolf spider, but they carry their egg sacs with their their jaws and pedipalps instead of their spinnerets. When their eggs are ready to hatch, a female will build a nursery “tent”, for the egg sac and guard them from outside. The name nursery web spider is given to the European species Pisaura mirabilis, but the family also includes fishing spiders and raft spiders. When escaping predators, they are able to jump a distance of five or six inches. If indoors, these spiders are often found in moist areas like basements.

The Nursery Web Spider is busiest during the months of April through August, and peaks again in November.