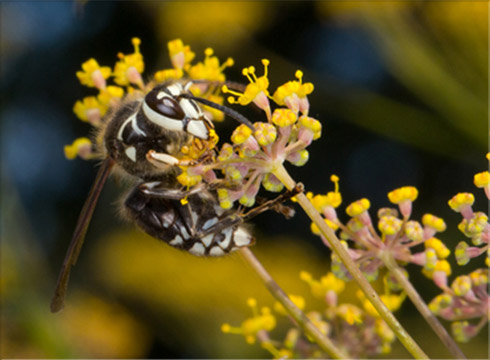 Bald faced hornets are relatives of the yellow jacket who get their name from the predominant black markings on their bodies and mostly white face. This stinging insect falls under the hornet category because of its large size and aerial nest. Bald faced hornets are social insects that live in colonies containing one hundred to four hundred members. They usually appear in late summer when populations are at their largest. Like other stinging insects in our area (with the exception of honey bees), the bald faced hornet does not reuse their nest season after season. Bald faced hornets build paper nests at least three or more feet off of the ground, usually in trees, shrubs, on overhangs, utility poles, houses, sheds and other structures. These nests can be as large as 14 inches in diameter and more than 24 inches in length. Although bald faced hornets consume caterpillars and other agricultural pests, they can be aggressive towards humans and will attack if their nest is disturbed. These hornets have smooth stingers that allow them to sting their victims repeatedly. Bald faced hornet stings carry venom that causes pain and irritation.

The Bald Faced Hornet peaks in the late Summer during the months of August through September.