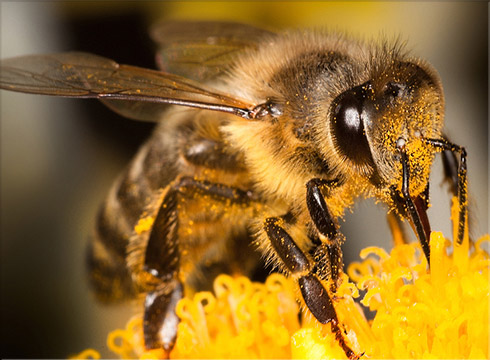 Honey bees are social insects found all over the world. They are highly beneficial because of their role in pollination. Honey bees pollinate over one hundred crops in the U.S. – without these domesticated insects we would have much fewer and less diverse fruits, vegetables, and nuts. Honey bees are active pollinators, and produce honey which enables them to survive the winters. The honey bee is the only stinging insect (besides ants) to overwinter as a colony. Unlike wasps and hornets, their colonies are perennial and don’t need to start new each spring. Honey bees produce honey from the nectar of the plants they pollinate and collect and store pollen, as well. These are stored in wax honeycombs inside their nests. They often build their nests in tree cavities, but will occasionally build nests in attics, chimneys, or wall voids. Honeybees do sting, but they can only sting once. However, for many people, their sting is not as painful as that of wasps and hornets. If the stinger is removed quickly, less venom will be injected into the wound. Persons allergic to insect stings will have a more severe reaction.

Honey Bees peak at the end of summer and stay busy into fall. They're mainly busy during the months of May through October.