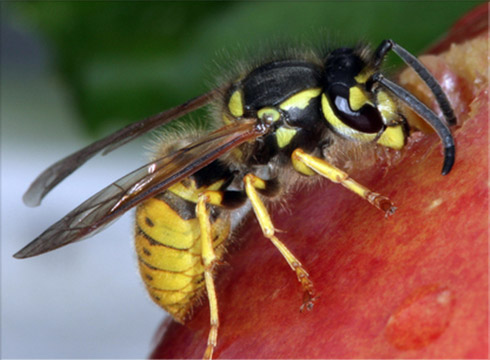 Yellow jackets are both a pollinator and scavenger insect species. They feed on meat and sugary carbohydrates which is why they are commonly found in or around dumpsters and other outdoor trash receptacles. Yellow jackets prefer to nest either low to the ground or in low hanging aerial nests such as tree limbs, landscape shrubs, or the corners of structures. Sometimes, yellow jackets will even build nests inside of wall voids. A yellow jacket colony can be upwards of over 1,000 workers. All workers in the colony are females. August is when males begin to appear. Males will die-off when cold weather moves in, but females who are fertilized hibernate over winter to become queens the following season.

The Yellow Jacket peaks at the end of Summer and remains busy into early Fall. It's mainly active during the months of August and September.