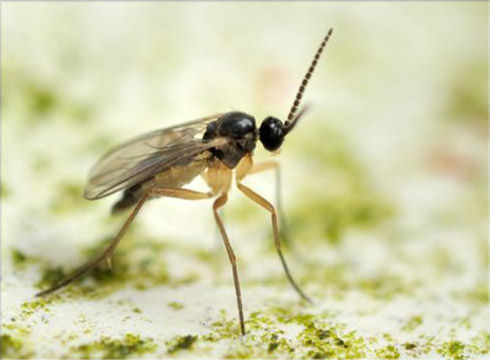 Fungus gnats feed on the roots of many plants including, alfalfa, carnations, clover, corn, cucumbers, geraniums, lettuce, peppers, potatoes, soybeans, wheat, and other organic matter. Fungus gnats are pest problems for greenhouses, mushroom cellars, and homeowners as they are known to feed heavily on house plants. Adults and larvae are found in moist, shady areas. The lifespan of an adult fungus gnat is about 1 week. During their lifespan, a female is able to deposit 100 – 150 eggs, which are laid in strings of 3 – 40 on the top of soil near plant stems. The larvae will begin feeding on a plants root hairs working their way to up the plant and into the stem. Fungus gnats do feed organic matter found in soils as well. They mature fully in about 14 days, and then construct a pupal case in the soil. The pupal stage typically lasts between 3 – 5 days. Adult fungus gnats are slow, weak fliers, but are quick movers on soil surfaces.

The Fungus Gnat is active throughout the entire year.